Visit of Ambassador of Kazakhstan Yerzhan Ashikbayev to California 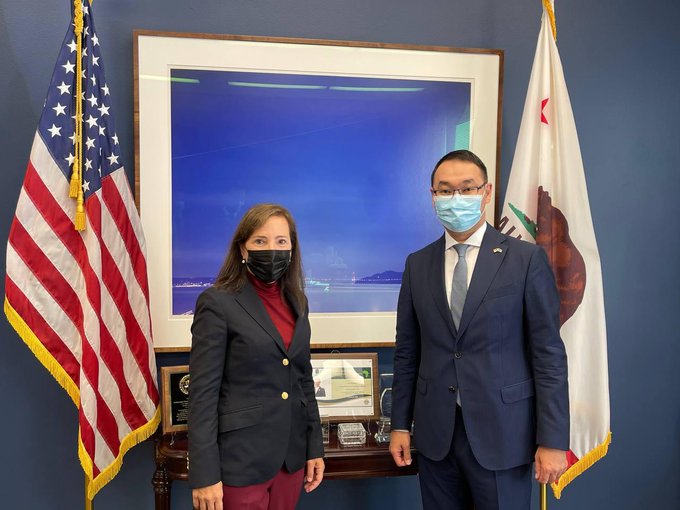 On October 25-26, 2021, Ambassador of Kazakhstan to the United States Yerzhan Ashikbayev paid a working visit to California.

As part of the trip, Ambassador Ashikbayev met with Governor of California Eleni Kunalakis, top managers and representatives of Chevron, StarX, Plug & Play, InDriver, the Kazakh diaspora, and also took part in a roundtable discussion at the Freeman Spogli Institute for International Studies, Stanford University.

During the conversation with Governor Kunalakis the parties discussed a wide range of issues, including the prospects for deepening trade, economic and investment cooperation, as well as interaction in the producing the environmentally friendly energy.

During the negotiations with representatives of the Chevron company, the issues of increasing energy efficiency and reducing greenhouse gas emissions in the oil and gas sector were substantively discussed.

“The Kazakh side is interested in the active participation of Chevron in projects to decarbonizing the national economy by introducing low-carbon technologies,” Ashikbayev noted.

Speaking with Plug & Play, the Kazakh side emphasized the importance of giving impetus to the development of the startup ecosystem in Kazakhstan, as well as attracting advanced technologies to the activities of large companies.

As part of the trip, Ambassador Ashikbayev also met with young Kazakhstanis working in local companies in Silicon Valley. Young specialists spoke about their activities and business projects in the IT and eCommerce spheres.