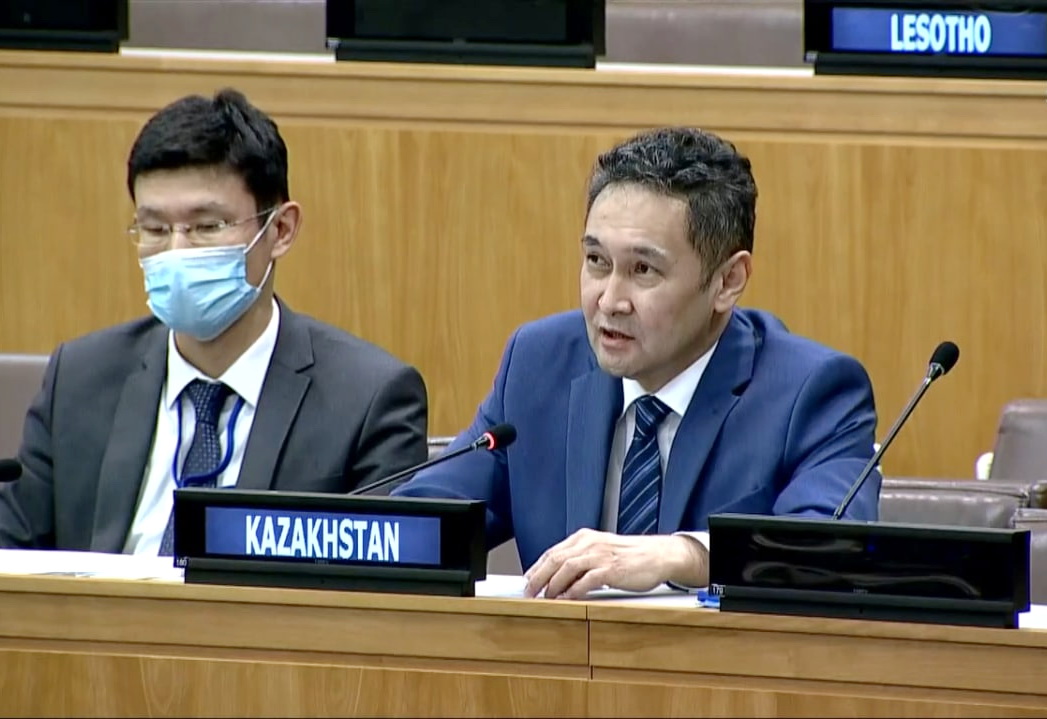 of the Ministry of Foreign Affairs of the Republic of Kazakhstan,

at the General Debate of the First Committee of the

Mr. Chairman, and members of the Bureau,

Let me start by congratulating you on your new roles and wish every success in accomplishing the First Committee’s mandate. I also thank the High Representative and ODA for supporting Kazakhstan’s initiatives.

Kazakhstan followed its own path of denuclearization, and proven that disarmament is one of the most convincing confidence-building measures for peace.

Thirty years ago, on 29 August 1991, Kazakhstan became the first UN Member State to close its nuclear test site at Semipalatinsk - the second largest in the world. We also renounced the world’s fourth most powerful nuclear arsenal.

To mark that historic date, 29 August was designated as the International Day against Nuclear Tests by the General Assembly. It adopted in December 2009, Resolution 64/35 initiated by Kazakhstan.

The closure of our test site also paved the way for other landmark processes, such as the adoption of CTBT.

Last month, on the occasion of the 25th anniversary of the opening for signature of the CTBT, Minister of Foreign Affairs of Kazakhstan Mukhtar Tileuberdi and CTBTO Executive Secretary Robert Floyd issued a joint statement, calling on the eight remaining states to sign and ratify the Treaty without delay.

We believe that a voluntary moratorium on nuclear testing is not an alternative to the CTBT. It must be brought into force to preserve its place in the international disarmament architecture.

The obvious lack of progress in disarmament resulted in the recent adoption of the Treaty on the Prohibition of Nuclear Weapons, which should complement the NPT.

Hence, nuclear powers, who signed the NPT, should promptly implement Article VI of the NPT. Likewise, nuclear powers outside the NPT, must join it without any preconditions and become non-nuclear states.

A nuclear-weapon-free zone in Central Asia was established in 2006 with the signing of the Semipalatinsk Treaty. This year marks the 15th Anniversary of this unique Treaty, the first of its kind in the northern hemisphere. On this occasion, all five Central Asian States issued a joint statement to work for security, stability, development, peace and environmental concerns in the region.

In 2015, Kazakhstan initiated the Universal Declaration on the Achievement of a Nuclear-Weapon-Free World. The resolution will be tabled again this year; and we look forward to your continued support.

Kazakhstan also stands for further implementing the Joint Comprehensive Plan of Action on the Iranian nuclear programme. As the host of several round of talks in Almaty, we urge all involved parties to show responsibility and commitment to their obligations under the Plan.

The world is currently facing unprecedented threats of the COVID pandemic. Hence, the United Nations must address biological safety as an emerging global challenge.

Addressing the UN General Assembly last year, President of Kazakhstan Kassym-Jomart Tokayev proposed to establish an International Agency for Biological Safety. We are currently working on the conceptual aspects of this initiative, based on the 1972 Biological Weapons Convention.

To conclude, Kazakhstan's First President Nursultan Nazarbayev is urging us all to achieve a nuclear-weapon-free world by 2045, the centenary of the United Nations.

Humankind should thus use every opportunity to carry forward the momentum for disarmament for a safer and more secure world for all.