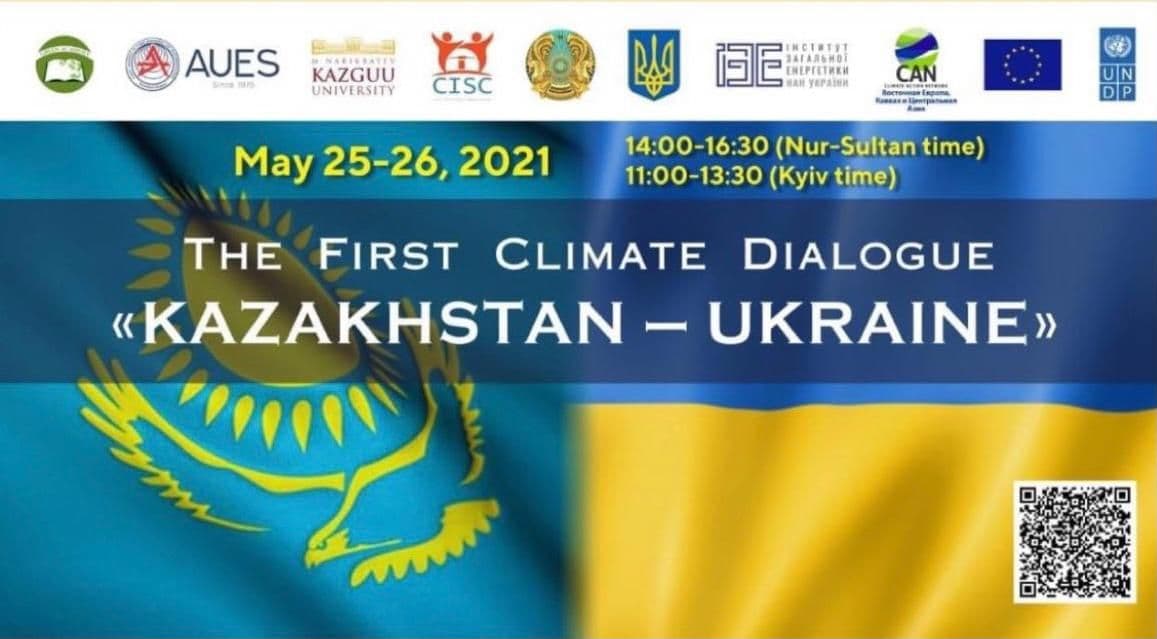 The first climate dialogue between Kazakhstan and Ukraine will be held on 25 – 26 May 2021.

The event will be held in the wake of the declarations by Kazakhstan and Ukraine of their ambitions to achieve carbon neutrality.

The first dialogue is entitled “Towards COP-26: Decarbonisation and Economic Mechanisms”.

The event will be attended by representatives of the Kazakh and Ukrainian governments, international organizations (UNDP, the EU, OECD and the World Bank), environmental activists and NGOs, academic institutes, universities, businesses, and climate experts from both countries.

The event will be held in a hybrid format. Two offline platforms (M.S. Narikbayev KAZGUU University in Nur-Sultan and “Parkovy” International Convention Centre in Kyiv) will be connected via a video conference on the ZOOM platform, involving 200 participants from the CAN EECCA (Eastern Europe, Caucasus and Central Asia) region and the Local communities and 500 participants from the NGO database of the Civil Initiatives Support Centre in Kazakhstan.

The dialogue will be opened by Dr. Darkhan Kaletayev, Ambassador of the Republic of Kazakhstan in Ukraine and the initiator of the climate dialogue.

The event will be moderated by the following CAN EECCA members: Dr. Bakhyt Yesekina, member of the Green Economy Council under the President of the Republic of Kazakhstan and director of the Green Academy, and Ms. Olga Boiko, CAN EECCA coordinator.

Other speakers are as follows: Dr. Saule Sagintaeva, Rector of the Almaty University of Power Engineering and Telecommunications named after Gumarbek Daukeyev and Deputy Director of the Institute of General Energy of the National Academy of Sciences of Ukraine Dr. Sergei Schulzhenko.

The dialogue is expected to result in the signing of three memorandums of understanding between Kazakhstan and Ukraine with a view to promoting low carbon technologies (between the Almaty University of Power Engineering and Telecommunications named after Gumarbek Daukeyev and the Institute of General Energy under the National Academy of Sciences of Ukraine; between the International Green Technologies and Investments Centre and Greencubator, and between the CAN EECCA and the Civil Initiatives Support Center).

During the second day, participants will discuss specific measures that can be taken to promote low-carbon development, including green investment (Mr. Oleg Khmelyov), the possibilities of a greencubator ( Mr. Roman Zinchenko), and the implementation of UNIDO projects (Dr. Saule Bishimbayeva).

The First Climate Dialogue is expected to result in a resolution for a Ministerial Climate Conference to be held in Bonn (Germany) in June 2021.