A ground-breaking victory has been achieved by the Republic of Kazakhstan in its long-running efforts to bring to justice the Moldovan oligarchs Anatolie Stati and Gabriel Stati (“Statis”).

On 16 November 2021, the Belgian Appeal Court conclusively determined that the Statis  engaged in a massive fraudulent scheme that defrauded not only the arbitral tribunal but also the Swedish courts during the prior annulment proceedings. This fraudulent scheme, the court held, had a direct impact on the arbitral tribunal’s findings both on liability and damages. On that basis, the Court of Appeal completely reversed a lower court order that had granted recognition and enforcement to the Statis’ USD 530 million arbitral award (“the Award”).

The law firm of King & Spalding represented the Statis in the arbitral proceedings and is coordinating their global efforts to recognize and enforce the fraudulent arbitral award, including in Sweden and Belgium.

As previously reported, the Statis obtained an ex parte order in December 2017 granting exequatur to the Award, which was subsequently confirmed by an order of the Belgium Court of First Instance in December 2019.  However, both of these orders were based on a limited factual record which did not include the new evidence of the Statis’ fraud.

In November 2020, the Brussels Court of Appeal in Belgium (“the Court of Appeal”) granted the Republic’s request to present its full fraud case, over the Statis’ objections.

Now, the Court of Appeal has validated the Republic’s case and confirmed the Republic’s long-standing position – that the Statis engaged in a massive fraudulent scheme, and that as a result the Award should not be recognized or enforced.

This decision by the Court of Appeal will result in a lifting of the attachment that the Statis have obtained over $530 million belonging to the National Fund of Kazakhstan, which is held by The Bank of New York Mellon.

"We welcome this landmark judgment in the Republic’s more than 10-year battle against the Statis and their accomplices.  It is the first time that any court has considered the Republic’s full fraud case.  After thoroughly analysing all the available evidence, the Court of Appeal confirmed that the Statis committed fraud on our nation, their auditors (KPMG), the arbitral tribunal and the Swedish annulment courts. The judgment has grave implications not only for the Statis but also their professional advisers.  It should serve as a point of 'no return' for those who are still aiding and abetting the Statis in their illegal schemes, including Daniel Chapman and his Argentem Creek group of companies.  On behalf of the Ministry of Justice, I confirm that we will not rest until the Statis and all of their co-conspirators are brought to justice."

Judicial Confirmation of the Statis’ Fraud During the Arbitration Proceedings

The Court of Appeal’s findings regarding the Statis’ fraud are specific and comprehensive.  After examining the voluminous evidence filed in the case, the Court held that: “the Statis have committed acts which qualify as fraud and deception.”  The court then held that these fraudulent and deceptive acts “have caused a definitive impact on the arbitral award” and that without these acts, the Award “would not have been rendered in the way that it was.”

In particular, the Court of Appeal held that the following actions by the Statis were false, fraudulent or deceptive:

On this basis, the Court of Appeal stated that it is now clear that the arbitral tribunal, in reaching its decision, “relied on evidence that is now known to be inaccurate and materially misstated.”  This false evidence, the Court of Appeal found, “had an influence on the Award, both at the stage of assessing the causal link between Kazakhstan's liability and the damage and at the stage of assessing the quantum of the damage claimed by the Stati.”

With respect to causation, the Court of Appeal held that it is “indisputable” that if the arbitrators had been aware that the documents produced by the Statis were based on financial statements containing material inaccuracies, the Republic would have been able to make submissions on this during the arbitration. Accordingly, the Court held that “the evidence and documents discovered after the award had been notified would have had a fundamental impact on the award.”

As a result, the court considered, "because of the Stati's inaccurate and fraudulent statements and of the fact that they concealed numerous pieces of evidence during the arbitration proceedings, Kazakhstan was deprived of its right to be heard on this fundamental issue.”

The Court concluded that all the evidence that has been gathered since the Award was handed down “demonstrates beyond any doubt the fraudulent conduct of the Statis”. The Court further found that “the investment of the Statis in Kazakhstan was done in bad faith”, and that “the dispute that was debated before the arbitral tribunal did not reflect the reality of the facts”.

The enforcement of the Award was therefore denied, and the prior decision which had granted enforcement was annulled, with costs to be paid by the Statis to Kazakhstan.

The Court of Appeal, before confirming that the arbitral award was a direct result of the Statis’ fraud, addressed and rejected a false claim repeatedly made by the Statis during the Belgian proceedings – that the Swedish courts had already rejected the Republic’s fraud case during the prior annulment proceedings.

In making this false claim, the Statis relied primarily on the December 2016 decision that they obtained in Sweden that refused to annul the arbitral award.

Rejecting the Statis’ claim, the Court of Appeal expressly held that the Statis had “deliberately misled” the Swedish court during the annulment proceedings.

The Court also found that key evidence of the Statis’ fraud – including the KPMG August 2019 decision to withdraw all of its audit reports for the Statis’ falsified financial statements – was not available during the Swedish annulment proceedings: the Swedish Courts “did not consider KPMG’s decision to ‘withdraw’ the audit reports since this information was not known at the time. They also did not take into account the deception of the Statis who have deliberately misled the Swedish Courts and who - knowingly - prevented these courts from being able to rule on the basis of all available information and evidence.”

The Court of Appeal also rejected another false claim made by the Statis – that other courts had already rejected the Republic’s fraud case on the merits.  The Court of Appeal made a number of critical findings in this respect, including the following:

The Court of Appeal also emphasized that its earlier June 2021 decision in the parallel conservatory attachment proceedings was only a prima facie decision which had not fully considered the evidence.  The Statis had improperly asserted to the contrary, and this was expressly rejected by the Court of Appeal, which emphasised that its judgment of 29 June 2021 was not relevant for the exequatur appeal.

Consequences of the Belgian Decision

Having found that the Arbitral Award has been procured by fraud, the Court of Appeal ruled that the application of the Republic of Kazakhstan to set aside the order of enforcement of such Award is well founded. The Court therefore annulled in its entirety the order of exequatur of 11 December 2017.

The denial of exequatur implies that the Award is a defective title which does not have any legal value and must therefore be considered as void. By way of consequence, the measures of enforcement pursued by the Statis will be lifted, including the attachment that the Statis had obtained over $530 million in property of the National Fund of Kazakhstan held by Bank New York Mellon.

Arnaud Nuyts, lead counsel in Belgium for Kazakhstan and head of Dispute Resolution at Liedekerke, said: “The mounting evidence of the fraud and of its impact on the Award had become truly overwhelming, and it was only a matter of time before the courts would ultimately take judicial notice of such fraud and draw the inevitable legal consequences. The Court of Appeal of Brussels has conducted a careful and thorough review of the entire records of the case. On that basis, it logically concluded that the Award had been procured by fraud and was based on evidence that has been recognized to be false, so that its recognition and enforcement should be denied.”

With this new victory, the Republic of Kazakhstan will continue to protect the rule of law and the interests of the Kazakh people. Accounting fraud and money laundering are serious crimes affecting the entirety of this case and that implicate all involved Stati parties, as well as their accomplices and co-conspirators, such as Daniel Chapman and his Argentem Creek group of companies.  This is particular truly where the judicial system is used for illegal purposes. The Republic of Kazakhstan will not allow the wealth of the Kazakh people to be misused to pay fraudulent investors.

The full background to the case can be found on https://kzarbitration.com/. 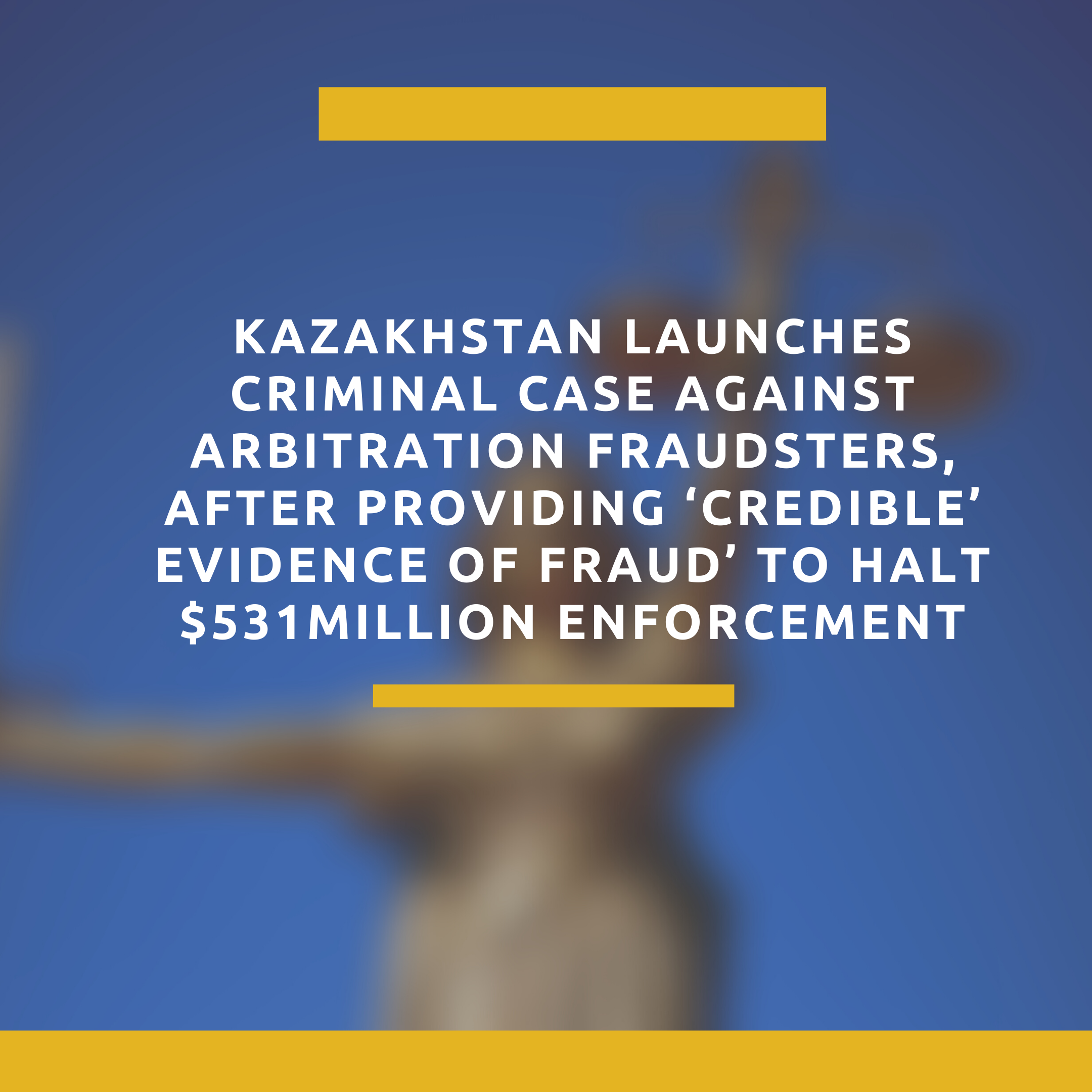